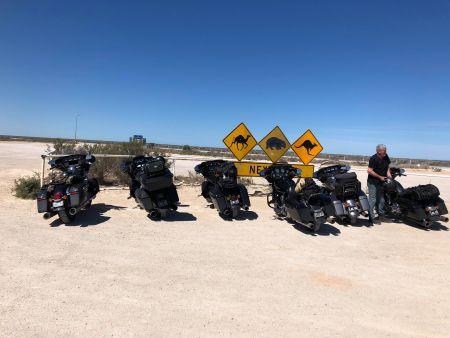 Several Months ago, Harley-Davidson® re-introduced a new model to their touring range.

The bike in question is the FLHT ELECTRA GLIDE® STANDARD.

Phil had one of these models several years ago as a customer loan bike. He was disappointed when the model was discontinued as he loved the motorcycle and how it was set up.

The FLHT standard is a true rider’s bike.

Whilst he understands that some riders want all the bells and whistles; there are some riders that don’t. Phil fits into the later category, so when he saw the new bike, he instantly wanted to try it out. Being a tourer, trying it out was not just a ride around the weir.

4000km was his target from Albury NSW, but he went a bit further than that!

This was his trip and report on the bike.

Hooked up with some guys from the Leeton Motorcycle Club in Mildura.

Ended up in Whyalla South Australia, via the scenic route across the back of the Adelaide Hills. I ended up doing an extra 100km by mistake… Great mistake, great ride.

Easy day down to Port Lincoln.

Mid-morning snack of oysters and a glass of red. Rode on to Ceduna. Feel the bike loosening up, running sweet as a nut! So smooth. Has a weep around the primary cover and I believe the primary breather may have a problem, nothing to worry about until I get home.

Ceduna to Nullabor roadhouse, said goodbye to the Leeton guys and returned and Ceduna.

It was time to start heading home as I needed to catch up to a great mate of mine who I missed the first time in Whyalla.

Catch up at Whyalla then of to Port Pierie.

Stayed the night at Swan Hill.

The stock 107 engine was bored to 114 and a torque cam fitted using the Screamin’ Eagle Pro Street Tuner.

Firstly, the stock tyres did a great job, as I said I traveled through 6 hours of the worst weather you would hope to get.

I was pushing hard to get to my destination before dark. The only tyre related incident on the whole trip occurred on the first day.

I came into a right hander way too fast for the conditions and once committed to a line I found myself in a tyre worn track of about one inch of water. The tyres were no longer in touch with the road. They were aquaplaning around the corner.

I held fast and puckered up.

The bike just held the line and eventually the tyres came back into contact with the road, without so much as a slight deviation.

What more can you ask from a tyre? I’m happy, anyway.

General handling of the bike was fantastic. It was sitting on 160km an hour at 3800rpm. Steady as a rock!

Had a real go in the corners several times and was super impressed. (All this carry on was on private property, of course).

The only criticism is the rear suspension may have been a bit hard, even on the softest setting.

I don’t carry any weight when I travel, jocks, socks, toothbrush and wet weathers; that’s about it.

So, if anyone had a passenger or more gear it would probably be fine.

I believe the bikes are set up for the roads in the USA, which are a whole different story to here.

Also, the stiffness helps the stability in sweepers which was always a concern with the Tourers once upon a time.

Smooth, heaps of power, what more can I really say?

In my opinion, if you look at Harley’s history, they have only ever improved their engines, and this is no exception.

To try and explain this is difficult, my favourite engine has always been the Panhead 1948-1965 but if they persisted with those engines, the motor company would have died long ago. At least I’m still riding a brand that has survived, not some revamped brand made by a farm bike company. All I can say to those riders is “well ya can’t save em’ all!”

I was going to throw in an Airhawk Seat cushion just in case… But I forgot.

Don’t take this as gospel, because all riders have different needs, but it suited my needs just fine.

I’ve learnt as I have ridden with all sorts of screens to give me a 10” or 12” clear screen any day of the week. Just the plain old straight one with no tint or fancy curves that distort vision. End of story.

Plenty of room in the two panniers for myself.

But there are plenty of add on options if you’re needing more space! Although travelling light is all part of the fun for me.

What vibrations? I honestly couldn’t feel anything through the bars.

Sorry, I don’t even start to think about fuel until I need more or I’m running low, then I go and fill her up and go again. The day I start riding to conserve fuel is the day it’s over for me.

The harder you lean on the pedal and lever the quicker it stops. Easy.

I got home and thought about this trip and honestly, I cannot fault this bike.

To get on something that still looks pure Harley-Davidson® and be able to go away and do on that bike as I did, is staggering.

If people want more than that, buy some other brand with no soul.

Most reports I get from people with handling issues come from the fact that they are just riding the bike way over and above what it is designed for. After all, Harley-Davidson® ultimately make cruisers, not race bikes.

To be honest, I ride all my Harleys hard and I even go out of my way to find good dirt roads. If and when I do have problems with my bike, it’s usually my riding style that could have prevented it. It’s a cruiser, not a racer, remember!

In saying that, some people do have problems with their bike through no fault of their own. Unfortunately, that is part of dealing with anything mechanical. It’s happened to me as well.

Maintain your motorcycle! Keep a good eye on the tyre pressure, so many complaints about handling and tyre wear only to find they’re flat most of the time! (Not checking the tyre pressure on my BadBoy a few years ago almost cost me my life, lucky to not have a serious off)

I hope you enjoyed this feedback; I know it sounds like the bike was almost perfect, but hey…. It just was.

“Every trip is an adventure”