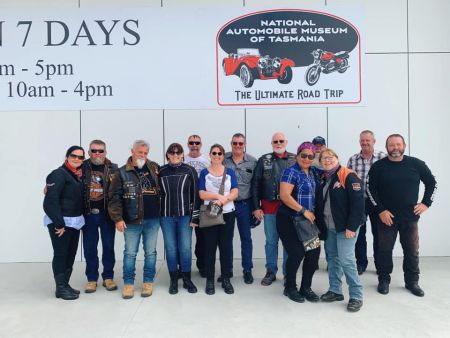 By Shane Kennedy AKA Shamus of Kelly Country HOG

It was Friday morning the 7th February at the BP Service Centre at The Logic Centre at Barnawartha not far from Wodonga and the culmination of about 7 months planning was about to come to fruition.

For me it was a major mark off my Bucket List… a trip around Tasmania on a motorcycle… in my case a 2016 Harley Davidson Switchback..

There was to be 14 people on 9 Harleys and 1 on a Tri Glide, they ranged from Road Kings, Street Glides to an Ultra all fuelling up for the blast down the Highway to Melbourne and the Port to the ferry terminal.

The excitement could almost be felt it was that tangible, some of the Hoggies had been there before but Barney and me, we were first timers and keen as mustard, as we had 10 days of riding ahead of us, with 8 of those being in Tassie.

The ride to Melbourne was uneventful as was expected given the Hume Highway is so boring, the checking in to board the ferry was easy as was the actual crossing, a cabin is certainly the way to go, the only hassle was the idiots who did not disable their car alarms, they went off regularly during the night.

Saturday morning at 10 to 5 they announce to all and sundry over the loudspeakers that we are close to docking and get yourself up and ready to disembark. We were lucky in that they let the bikes off first so we were heading into town, but we need fuel so to breakfast. Those in the know soon have us at a café with a fixed price for an eat all you can brekky, excellent. Bmac having been there before gives her cheek and gets a mouthful back, we are made welcome. A great start to Tassie.

I had been warned that I would need thermals and waterproofs as Tassie was cold and wet, well what we had for the time there was nothing like that, great days and nights where we could have a fire and a sustaining drink whilst discussing our travels for the day and what was happening tomorrow.

There were 3 days in Hobart and surrounds with a visit to Port Arthur being one particular highlight, not everyone did the same tours so we all had different stories to tell each evening.

Day 4 and we are heading for Tullah via Queenstown, with a stop at “The Wall” a carving by one man in Huon Pine, at $15 a look a bit pricey but the work is excellent and ongoing. The trip took all day BUT the roads were fantastic, I think I left some metal on the corners and I was having a ball and for the second half of the ride we were all enjoying being on our Harleys.

After overnighting at Tullah we headed for Launceston via Cradle Mountain again the roads were excellent and we had settled into a riding group, each giving room/space to travel as we felt comfortable on roads new to most of us.

Launceston, wow, it has a lot going for it and can see why people would want to live there, we visited the Chair Lift (Coffee & Cake… talk to Deb about that) and had a good part of an afternoon at the all new building housing the Motor Museum. Now that was time well spent with all the early GT Fords, Holden Monaro’s and Racing Open Wheelers as well as European Exotics and early vehicles from Tassie’s past.

Of particular interest to us was a collection of early Harleys one in particular was “as found”, it had a racing history with a side car and passenger amazing, the racing speed was in excess of 100mph (over 160 klmph). All the vehicles were privately owned and on loan by the owners.

Whilst in Tassie it would be criminal if you did not have a feed of seafood, so early one morning 5 bikes headed for the East Coast, leaving Launceston headed to Scottsdale then St Helens and St Marys to Bicheno where Cray’s and Fish were consumed with gusto. It was still early so we headed to the Pancake shop via Elephant Pass, Bryce was stopped in his tracks (from what I understand it was a first) and had to call for a “doggie bag” to take a good part of his pancake home. Now this road was so good it was Barney’s favourite, just ask him, he is still talking about it.

Friday night saw us at the Restaurant that is attached to Richardson’s Harley Davidson, the Tassie Dealership, for a farewell meal, the food was probably the best we had (in eating out) for the whole of the trip.

Well blow me down it is Saturday already and we have hardly touched Tassie but what we have seen so far, well what do I say, I have used excellent so many time now I do not know what adjective to use in its place.

The trip to Devonport was at a leisurely pace as we had been advised of the late arrival of the ferry so some of us took the opportunity for a little back roads travel first visiting Longford to see the pub with motor memorabilia from the early 50’s & 60’s when street racing was all the go and some of Australia’s greats competed, put that on your list when you visit.

Others did a big ride not exactly sure where to or via but Lia said it was her best in Tassie so much so that she did not get her camera out she was having such a good time.

The second stop for us was Deloraine where we had a coffee at a 1950’s styled coffee shop complete with “Betty Boop” and squillions of oil cans/bottles and then down the main street where we parked and watched street rods of various designs travel the streets, Sunday was to be a big Show n’ Shine so they were out and about, good viewing.

We were now on the home stretch to Devonport and with some time up our sleeves we visited a Chocolate shop, for tastings and an ice cream, very nice, we did leave some funds behind and were making room in our packs to fit our purchases.

Still with time available we decided to have a look at Devonport and take a trip out to the Vietnam Memorial and the Lighthouse, it was on our way back to the Port that we espy the others who were having a refresher from their big ride, we were soon back together and headed for the boarding area.

It was late when we boarded so it was something to eat, a few social drinks, and bed, as it was to be an early start for Sunday on the trip home.

My Bucket List major was complete and I had a bloody fantastic time helped by the other 13 riders/pillions, we had fun, traveled some great roads and saw some beautiful country and thoroughly enjoyed ourselves.

If you get the opportunity do not pass it up you will not regret it.